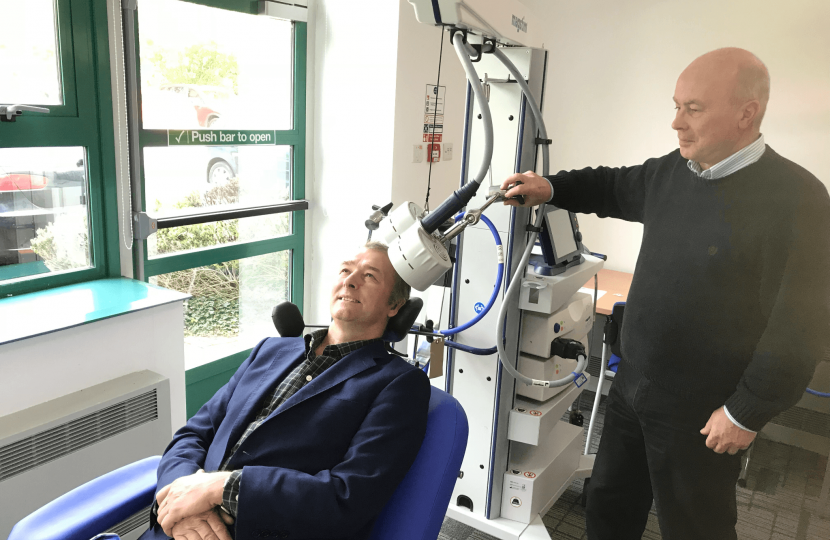 Simon Hart MP has visited a Whitland company that is pioneering a ground-breaking treatment for depression that is changing patients’ lives across the world.

Magstim TMS therapy has few known side effects and is proven, safe and effective. Magstim has been a pioneer in the development of TMS for the past 25 years and now supplies TMS stimulators around the world

“The work being done by Magstim is groundbreaking and is proving to be a real game changer in the treatment of depression,” said Mr Hart.  “It’s very exciting that a local company is leading this field.”

TMS, which is accredited by NICE (National Institute for Health and Care Excellence), is increasingly being used by practitioners in cases where antidepressant medication is proving ineffective and before invasive treatments like Electroconvulsive Therapy (ECT) are considered. Worldwide clinical studies are ongoing into other applications for TMS.

Magstim, which employs 92 people at its Spring Gardens factory, has now won a contract from the Department of Veteran’s Affairs in the USA to help treat Major Depressive Disorder in former soldiers.

Magstim’s Group CEO Lothar Krinke said: “We are proud of the enormous strides we have made in Transcranial Magnetic Stimulation since the 1990s and to fly the flag for medical technology in West Wales.

“Patients across the world are increasingly looking for less intrusive, non-drug treatment options and our developments in recent years have not only seen the company grow globally, they have seen Magstim TMS therapy develop an excellent track record in the treatment of depression right across the world, with strong remission response rates and low side effects.”

*Find out more about Magstim TMS Therapy at: https://www.magstim.com

PIC CAP; Simon Hart MP is given a demonstration of a TMS therapy chair manufactured at Magstim in Whitland by Dr Michael Polson, Chief Technical Officer.