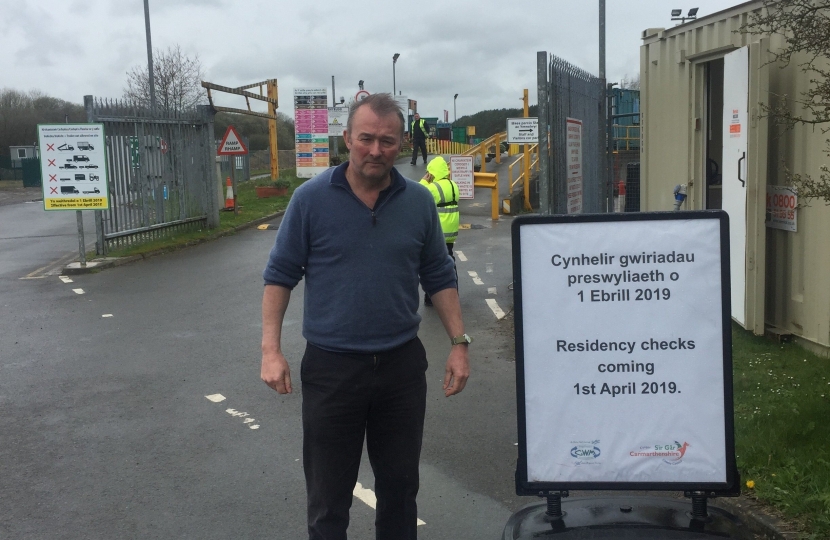 Carmarthenshire County Council operates a household recycling facility right on the border with Pembrokeshire and from April 1 users have had to take along identifying documents to prove they live in Carmarthenshire.

“I have had a number of calls about this issue because the tip is right on the border with Pembrokeshire and has been used by everyone within a 10-mile radius up til now,” said Mr Hart.

Now Pembrokeshire residents are being turned away and told to visit the next nearest Pembrokeshire-run facility in Crane Cross near Tenby – a 22-mile round trip.

“It is not exactly eco-friendly to be telling people to drive so far in order to do their recycling and I fear that some are going to go to the nearest layby or quiet lane and dump their rubbish there,” said Mr Hart.

“Just a week after the clampdown and a photograph of a tyre and a rabbit hutch dumped in a layby near Llandewi Velfrey was posted on Facebook.

“I have written to Pembrokeshire County Council to ask them to look into compensating Carmarthenshire for use of the tip by Pembrokeshire residents.

“Pembrokeshire runs a recycling centre close to the border at Hermon so surely some sort of reciprocal arrangement could be arrived at?”