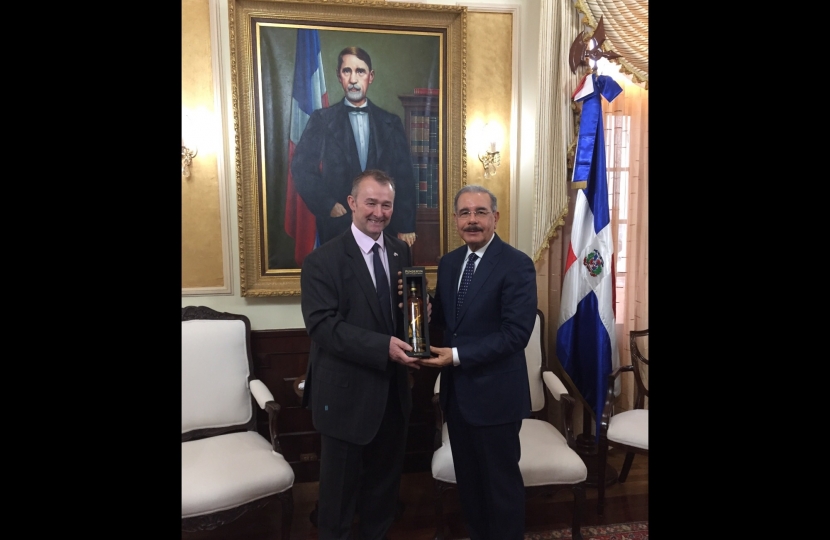 Simon Hart MP has visited Panama, the Dominican Republic and Costa Rica to encourage trade links with Wales and the UK in his new role as the UKs’ first trade envoy to the area.

Whilst in Central America he met the Presidents of all three countries and joined the British ambassador in hosting receptions for businesses interested in trading with the UK.

As trade envoy his role is to facilitate and negotiate trade relations and marketing interests between the three countries and the United Kingdom.

The UK is the fourth largest investor in Panama, with $2.6bn spent there in 2016.  Many UK companies – in more than a dozen sectors – have their regional offices in Panama and the number one export from the UK to the area is alcoholic spirits.

“All three countries love their whisky in particular which is why I took each president a bottle of Penderyn whisky from Wales to introduce them to the product,” explained Mr Hart.

The Panamanian President, Juan Carlos Varela, announced Simon Hart's arrival via his personal twitter: “We talked about the opportunities to strengthen the trade ties between Panama and the United Kingdom.”

As well as President Varela, Mr Hart also met British companies with an already established presence in Panama and visited the Miraflores Lock of the Panama Canal.

Mr Hart added: "My position as trade envoy to Panama was met with great hospitality and sincerity by all, it was a fascinating tour and I hope that it will result in closer trading links between our countries.”