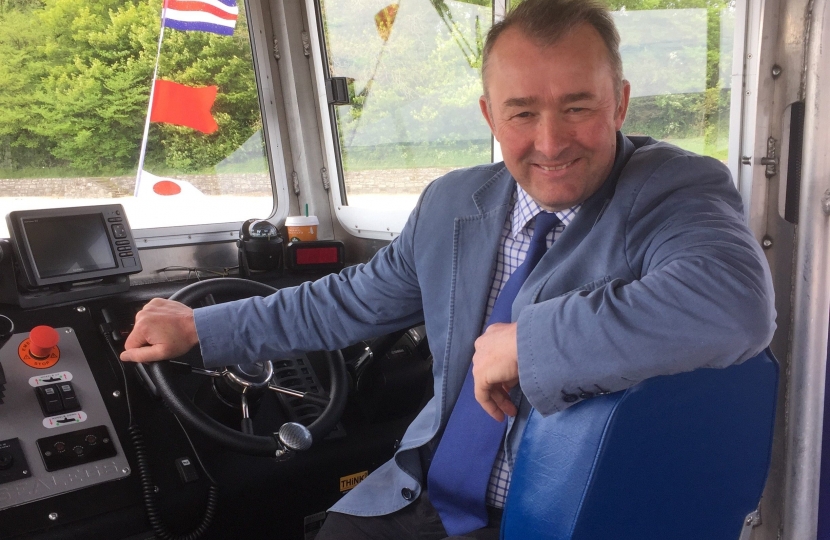 The villages of Llansteffan and Ferryside are directly linked for the first time in 60 years thanks to a new ferry officially launched by Simon Hart MP.

“The Glansteffan” is an eight-seater amphibious vehicle which is running between the two Towy communities five days a week.

It’s been set up by Carmarthen Bay Ferries, a community interest company, with funding from the Coastal Communities Fund.

“It was great fun to watch the ferry cross the river, drive up the beach on its wheels and then greet the Carmarthen East MP Jonathan Edwards as he disembarked from the Glansteffan,” said Mr Hart.

“It was a real example of the linking of the two communities as strictly speaking we MPs are never normally allowed on each other’s turf!

“The Carmarthen Bay Ferry project was one of only 16 out of 160 that won funding from the Coastal Communities Fund so all credit must go to the team behind the company for making such a strong bid.

“This will be a huge boost to the local tourist trade as well as already creating two full time jobs on the boat itself.”

The Glansteffan, which was made by Robust Boats of Solva, will run as a ferry service on Wednesdays to Sundays, and is also available for hire and for scenic cruises around Carmarthen Bay on Mondays and Tuesdays.

*Check out carmarthenbayferries.co.uk or find their facebook page for more information.