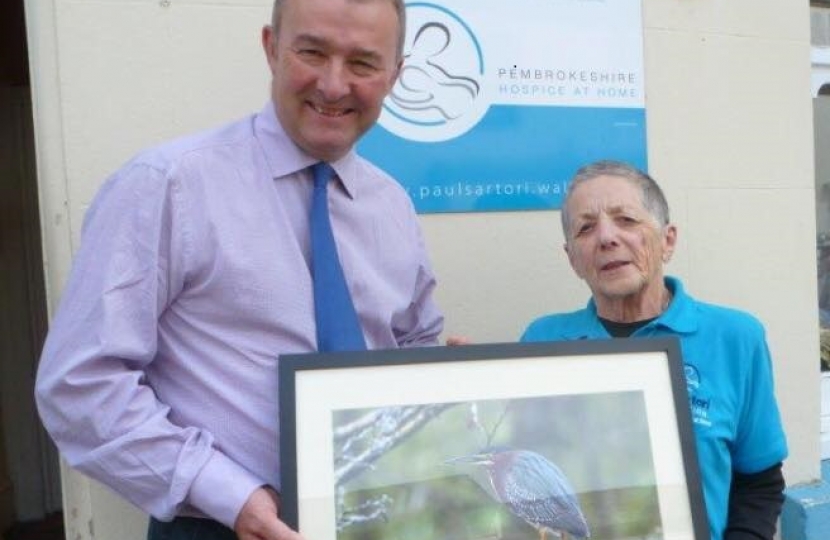 Simon Hart MP is pictured with Ruth Barnes, supervisor of the Paul Sartori Hospice Shop in Narberth after handing over £500 to the charity.

Mr Hart raised the money by opening his garden near Narberth to birdwatchers who flocked from all over the UK to see a rare green heron.

“We were happy to let people stand on the lawn to look at the bird and we provided tea and coffee,” explained Mr Hart.  “They were very generous and we raised £800 in 10 days.

“It was only the 8th time the bird has ever been seen in the country and we had visitors from as far away as Scotland and Norfolk -  it was amazing to hear how far they had travelled.”

Sandra Dade, charity manager for the Paul Sartori Foundation said: “Seeing such a rare bird in this part of the world just goes to show how environmentally important Pembrokeshire is. The rurality of our precious county definitely has its benefits.

“But the downside is the widespread reach to those who need help at the end of life, and this is where Paul Sartori Hospice at Home Service supports our community.

“We couldn’t deliver the quality of care that we are so well known for without help. Thank you to Simon’s for thinking of us and his very kind gift and thank you to everyone, near and far who made a donation”