MP CELEBRATES AS MORE OF PEMBROKESHIRE COVERED BY 4G 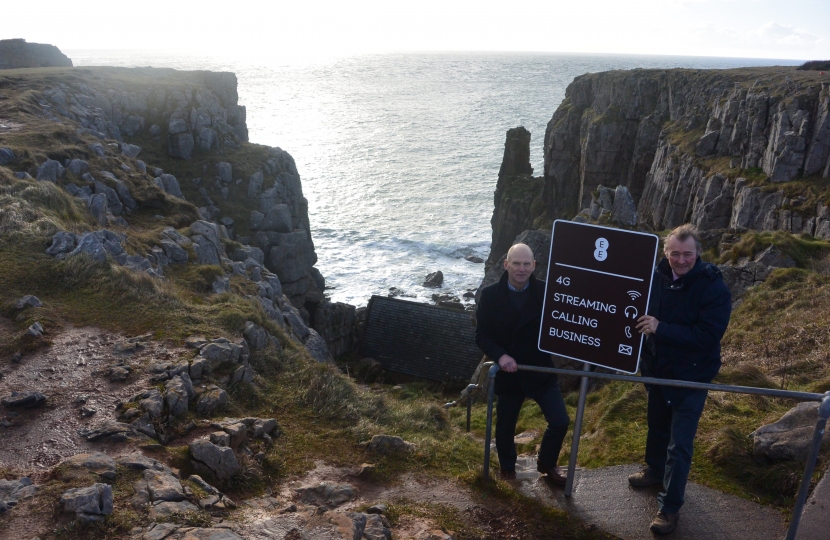 MP CELEBRATES AS MORE OF PEMBROKESHIRE COVERED BY 4G

Simon Hart MP is delighted that 4G coverage has been switched on in a rural part of South Pembrokeshire.

Castlemartin as well as Warren, St Twynnells, Bosherston, Stackpole are now covered by the improved mobile phone signal as a result of EE switching on a new mast.

“This is part of EE’s ongoing investment to provide coverage for the new Emergency Services Network, which will connect 300,000 UK emergency services personnel,” explained Mr Hart.  “EE has also upgraded more than 30 other sites in Carmarthenshire and Pembrokeshire to 4G.”

EE, the UK’s largest mobile operator and part of the BT Group, now has 4G coverage in more places than 2G and 3G.

“In places where there is slow broadband this can provide an alternative to waiting for fixed line broadband as it can be delivered by 4G home router with an external antenna instead,” Mr Hart added.

PIC CAP: Simon Hart MP is pictured with Geraint Strello from BT at St Govan’s Chapel near Bosherston which now has 4G coverage with EE.