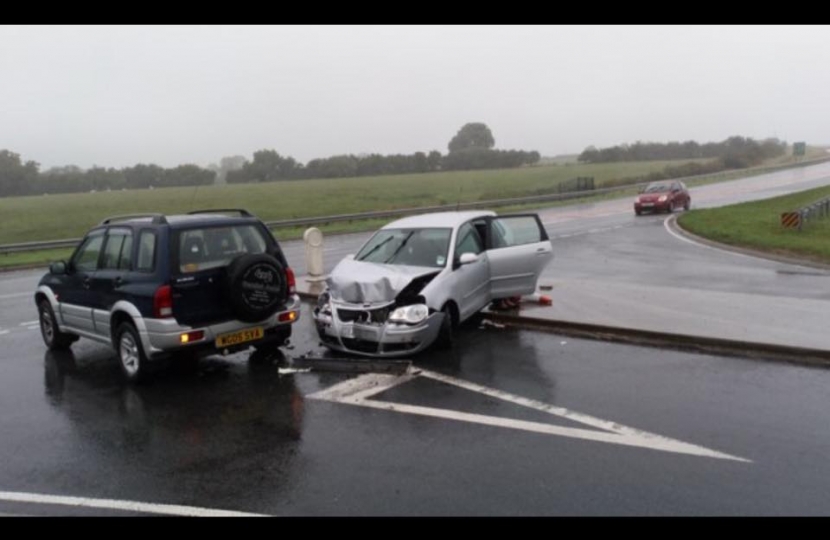 Simon Hart MP is calling for evidence about a dangerous junction in Red Roses following a number of crashes at the accident black spot.

Since the new by-pass opened in 2014 Mr Hart has been lobbying to have the junction made safer.

“If you have ever tried to turn left off the main road when travelling from the St Clears direction then you will share my concerns,” he explained.

“It’s a long straight bit of road but there is no slip road, only a very acute turning to get off the road.  You have to slow right down to take it safely, cars are travelling up behind you at speed and many people misjudge the tightness of the turn.”

Following initial complaints from Mr Hart, monitoring equipment was installed and more signs put up.  However, near misses and crashes have continued and Mr Hart has been pressing for the Welsh Government to take action.

“They told me back in 2015 that they needed three years’ worth of accident statistics to be able to make a decision, when I asked for those this Spring I was told that they still hadn’t been collated – despite it being months after the three-year period finished.”

A recent Facebook post by Mr Hart of a smash involving a 4 wheel drive vehicle at the junction has reached nearly 6,000 people – and dozens of drivers have got in touch to say they have had accidents and near misses at the same spot.

“People have got in touch to say they have dash cam footage of near misses, others have seen people reversing up the main road when they have missed the turning and plenty have had people swerving round them as they slow to take the junction,” said Mr Hart.

“I understand that the sign at the junction has already been wiped out twice this month. I am writing to the Welsh transport minister yet again on the topic and if anyone has any further evidence then I am keen to hear about it.”

Editor’s note: this photo is taken with permission (of Phillip Huw Davies who posted it) from the Red Roses Village Facebook page. You may want to contact him and Emily Clarke of Emily’s Funky Knits for more quotes.